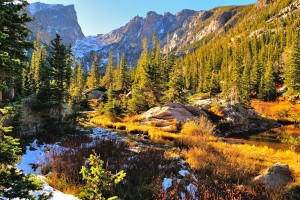 If you find yourself near the San Luis Valley, in Hooper, Colorado, do yourself a favor and check out the UFO Watchtower. Once a Colorado rancher, owner Judy Messoline opened the UFO Watchtower in 2000 after finding her cattle ranch not as profitable as she had hoped. With bankruptcy quickly approaching she realized she needed to diversify. Messoline had heard the rumors that nearby San Luis Valley was a popular landing spot for otherworldly visitors. She came up with an idea to create a space where UFO enthusiasts and novices from around the world could connect with each other to discuss their experiences.

Thousands of (human) visitors come through the campground and Watchtower each year. Though many come out of curiosity or in response to billboards along the highway, others arrive with the hopes of experiencing a close encounter of their own. At 7600 feet those seeking to catch a glimpse of flying saucers say it’s one of the best places in the world to catch a glimpse of UFOs.

The area surrounding the Watchtower has long been thought to be a special place by mystics and local Shaman. Local Indian tribal origin stories speak of human thought originating in the surrounding mountains. Conspiracy theorists believe that there are hidden military instillations in the surrounding mountains that are there to initiate contact with extraterrestrials. In addition some New Age folk there hold a belief that the mountains hold the mystery to a vortex that leads to otherworldly entrances. Whatever your belief, Ms. Messoline does not rule out any possibilities. Though she cannot say for certain whether or not UFO’s exist, she is open to the idea that something else might be out there and is happy to provide others with a means to decide for themselves.

The UFO Watchtower is located on 2502 County Road 61 in Hooper, Colorado, just off Highway 17. Admission is $2 a person or $5 for a car. The facility and gift shop is open year-round, as is the campground. Rates for the campground vary.