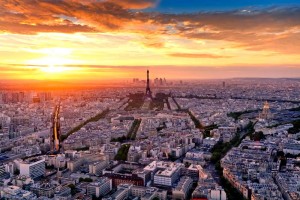 When you read any travel blogs or books, they always give you the highlights of any city. One of the highlights of Paris is Sacre Coeur. Sitting atop the lone high hill in the City of Lights is one of the most beautiful churches in the city, Sacre Coeur. You can see the church from anywhere in the city but one of the best ways to see it is of course up close and personal. William Bailey Travel invites you to come with us and take a closer look at this magnificent destination for travel.

The Basilica of the Sacred Heart of Paris or Sacre Coeur, is a Roman Catholic church dedicated to the Sacred Heart of Jesus. This popular landmark reigns supreme on the crest of the arrondisement of Montmartre the gathering place of all the ex pats of the 1920’s. Construction began in 1875 and the beautiful, white, Byzantine-Romanesque church was finally finished in 1914. The white church will always remain unsullied against pollution and the testament of time because it was built from travertine and withstands the elements. There are a few things not to be missed as you wander around the church and grounds.

The large scale mosaic in the apse is one of the largest in the world and is called Christ in Majesty. The pipe organ that is housed in Sacre Coeur was originally intended for private use in a residence but somehow found its way into this glorious church. Built by Aristide Cavaillé-Coll, it was installed in the church in 1904 and the creation is still ahead of its time, and creates some of the most beautiful music that resonates throughout the church. The piece de resistance of Sacre Coeur is the dome. Access to the dome is from outside of the church, and you will be climbing a nail biting set of stairs. The precarious steps are worth it though as you will find the Paris cityscape laid out before you with stunning panoramic views. On a perfectly clear day you can see for nearly 30 miles.

Sacre Coeur is easily accessible by the Metro. You will find yourself traipsing through one of the less fortunate looking areas of Paris. Just keep your eyes open and be aware of pickpockets. This is by far one of the highlights of the city, and it sets you atop the City of Lights.

You can find out more about this amazing site by visiting their website at www.sacre-coeur-montmartre.com.